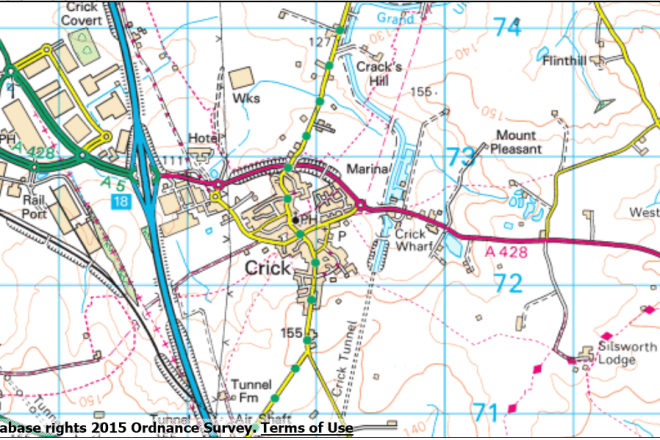 This is from a website that has footpath maps

As we’ve mentioned previously, our first stay in the UK was in the village of Crick (note that here in the UK historically a city is defined as having a cathedral, a town if it only has a market, a village if it only has a church and shops, and a hamlet if only houses), whose name comes from the celtic word for hill, cruc, and is located on the Northamptonshire Heights (see the plaque). We arrived at the beginning of November and stayed through the 30th at the Low Thatched B&B in the efficiency flat. A nice lodging with access to washer and dryer, small kitchen, and roomy bathroom with shower.

Plaque on top of Crack’s Hill

Crick is located near to the M1 motorway, has a bus line through it, is walking distance to the Grand Canal, and is about 20 minutes drive to downtown Rugby, the nearest town where there are major stores, shopping markets, and the train. That’s where we go for groceries. So we’re in the sticks here, lots of farms and fields outside town, but an industrial park over near the M1 and only a short drive to town. Further to the west of Rugby is Birmingham (in the top three biggest cities in England), a large city with airport, trains, big industry (coal) and of course a cathedral. It’s about an hour from Crick. North of Crick up the M1 is the smaller city of Leicester (for non-Brits, that’s pronounced like “Lester”), maybe 30 minutes drive. London is south about an hour ride on the train from Rugby. 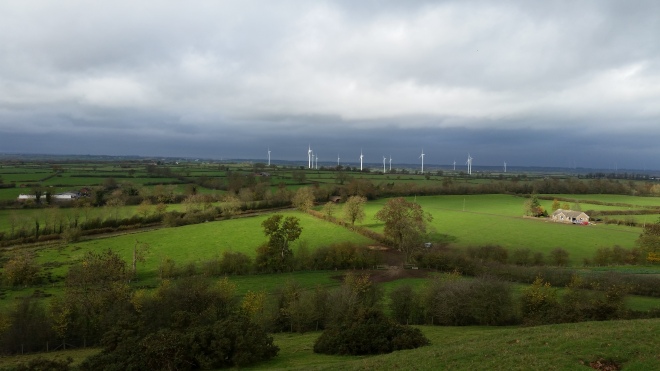 From the top of Crack’s Hill

In Crick there are three nice pubs, one of which, The Wheatsheaf, we frequented regularly. There is also a co-op food store, small and kind of expensive, post office, hairdresser, a few other shops, two churches and plenty of foot, bridle and bicycle paths for tramping, including the canal towpath.

One of Crick’s churches. The wreaths and crosses are for Remembrance Day. Some of the tombstones are so old they are illegible.

The architecture is a mix of very old to quite modern. Thatched roofs alongside tile, quite often with solar cells or hot water panels on them.

One of my favorite examples of thatching

One problem we had once we were able to borrow a car was parking it. Only street parking was available, and that sort of blocked one entire lane of the road. Believe me when I say these roads were none too wide to begin with before losing half a lane. Also people parked in either direction on that side to make it more interesting. So getting through could be a headache if, for instance, the garbage truck, local delivery van, or a bus was trying to get through as well. Sometimes “reversing” was required, or use of the sidewalk. We did have an incident where our “pavement” (sidewalk) side mirror was broken off. We assume someone staggered into it, I was able to get a used assembly and some matching spray paint to replace it. Not too hard a job even with only my multi-tool but irritating. We made sure to keep the mirrors pulled in whenever we parked after that.

We found the people of Crick to be very pleasant, especially our hosts at the B&B where we stayed. Seems Brits will readily engage in conversation with little pretext. We found ourselves telling our story quite often. In between job hunting while Sandy was hard at work during the day, I made several hikes mostly along the canal towpath with excursions to the top of Crack’s Hill, a high point in the area with good views. Since the canal winds near to several towns within walking distance I used it to visit other local towns like Yelvertolf, where there was a great little Italian deli, Squisitos, that would custom make sandwiches to order. With fresh espresso! Best I’ve had since Italy.

All in all, a pleasant stay for our intro to the Midlands. Next we’re off to a rental house in Husbands Bosworth! 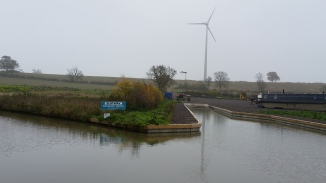 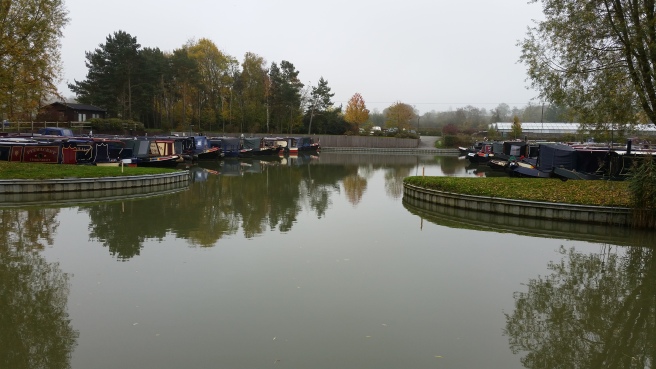 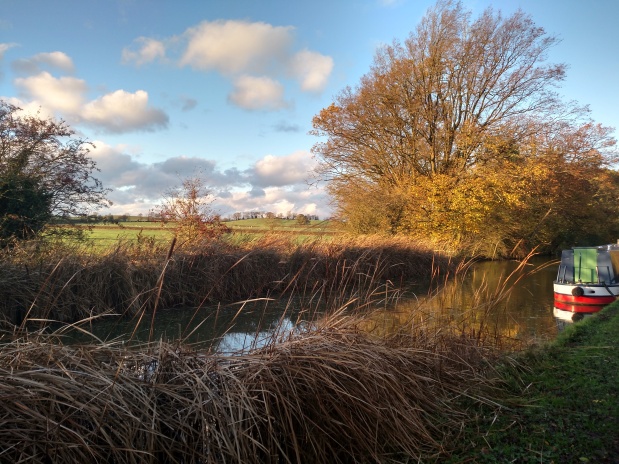 I’ve been going in to the Lightning Tools office each day, and am very much enjoying the new offices and the company of my colleagues. On Monday, I tried taking the bus, which seemed convenient on paper… It’s only a 5-minute walk from our flat to the #96 stop across from the Crick Post Office, and then I only had to go one stop (about 2 miles) to the first West Haddon stop, and then walk about a mile to the office. What I hadn’t realized is that it costs £2.50 to go those 2 miles, and that there’s no sidewalk (oops, “pavement”) between the bus stop and the office – so I arrived at work with soaking wet sneakers and socks, from walking in the long dewy grass along the road for a mile. Luckily, I had nice dry socks in our “England box” (the suitcase we shipped here before we left for Germany), which was stored in the office. And then I was able to get a ride home with someone from the office, since I was lugging the suitcase.

Pretty, but very wet, and not really a path.

On Tuesday, I wised up and took dress shoes and socks with me in a bag, since I decided to try another route: I saw on the ordinance maps that there’s a footpath that cuts off having to walk along the busy main road and cuts out some of the distance, so I thought the 2-mile walk wouldn’t be bad (i.e. not bother with the bus at all). What I hadn’t realized is that this footpath was far less traveled than the ones I’d walked on around Lutterworth in January – it cut across horse pastures with long wet grass, and fields planted with some sort of kale-ish vegetable, so that by the time I reached the country lane, my sneakers were caked with mud, and I was soaked up to my knees. But at least I had dry socks and shoes to change into before entering the office door. Very luckily for me, arrangements were made that day for us to be able to borrow a friend’s car for the time we’ll be here, so I’m extremely grateful for that. The alternative would have been for us to either rent a car, or find one to buy cheaply and resell later, as my plans to live within walking/transport distance of work just didn’t work out

We’ve found, despite my wishful thinking (and yes, I had been warned, but I’m a stubborn sort), that in this area there really isn’t a way to get around without having a car, much like rural Pennsylvania. So anyway, now we have a car to use, and that means we can look for a different (i.e. larger, and less head-bumping) place to rent at the end of November, as well as go to larger shops and more-distant points of interest. And by the end of the week, I was feeling pretty good about my left-side-of-the-road driving, though I still need lots of practice, and haven’t dared a highway yet. The villages are challenging enough for now, with their narrow streets and on-street parking.  Left-handed shifting is easier than we thought it would be, negotiating roundabouts takes concentration!

Here are some other things we’ve done this week:

On Thursday we packed up and hopped the local 5Terre Trenitalia up to Sestri Levante (about 40 minutes).  There we switched to the intercity train which would take us to Milano Centrale (Milan’s main downtown rail station). We had e-tickets for a 2nd class cabin and reserved seats on this train.  BTW, the Trenitalia website is easy to use for planning routes and purchasing tickets online.  The views along the coast especially near Genoa are spectacular along this section of rail, though it’s hard to get a good pic since there are so many tunnels.  Just as you line up a shot you’re into a tunnel!   As the train turned north away from the sea we passed through even more tunnels, seemed at times there were more tunnels than open rail.  Once at Milan Centrale (about 2 hrs from Sestri Levante) we purchased tickets for the Malpensa Express out to the airport.  We had reserved a room at the airport Sheraton (on points) for the night.  All in all, smooth trip, no issues, even managed to avoid the pickpockets this time!

The train comes into Terminal 1.  From there we had a very short indoor walk to the airport hotel.

The alps from the Milan Malpensa Airport

Next morning we caught our flight on Flybe Airlines to Birmingham, UK. This is one of those small airlines where you board a bus and traipse out to the plane, then walk up a stairway (or ramp) to get on.  Turns out my carry on bag was at the limits size-wise for this plane, had some trouble getting it in the overhead. After clearing the alps, two hours later we were landing in Birmingham.  Sandy had been through this airport once before, but it was a bit of a challenge figuring out which train we needed to take to get to Rugby.  We actually ended up on the wrong train but a very nice Brit helped us out and also showed me the phone app for the train schedules and e-tickets.  That helped a lot as we were better able to determine which trains went where.  Just a side note, I’m very glad I took Nomadic Matt’s suggestion about T-Mobile’s Simple Choice plan when I switched phone carriers.  I have free 3G data and texting in 140 countries outside the US.  Sweet!  So doing things like searching google maps or loading a helpful app is no cost, though sometimes a little slow.

Once we had the right train it was a short ride to the Rugby train station, then a taxi to our hotel.  We were staying at a Holiday Inn for two nights (one on my points) since our “flat” wasn’t available until Nov 1. We had a nice British breakfast next morning (sigh, no espresso, going to miss that), roamed around Crick (15 minute walk), walked along the Union Canal (This area has more miles of canals than Venice, dating back to the Roman times.  You can rent these narrow canal boats to cruise them. Just upstream of here are 21 locks in series all manually operated.), had a beer at the local pub, and relaxed again.  Brits are very friendly!

Along the Union Canal coming to a tunnel. The sign says it’s 1500+ yards or nearly a mile!

At one of the three local pubs in Crick, The Wheatsheaf Inn

First British Real Ale, well some of it anyway.. 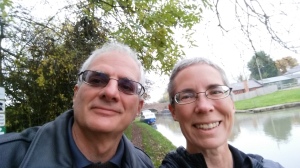 In the UK! Canal boat in the background.

So on Sunday our host, Mark, picked us up and delivered us to our next home-for-awhile place, The Low Thatched Cottage,  located a few miles away in the village of Crick.  More on that later….  Ta!