Ever since our daughter told us about the Cinque Terre trails (sentieri) after her visit here about 10 years ago, we’ve been wanting to hike them ourselves, so this was a big reason for our choosing to come here. In this post, we’ll write about each of the hikes we’ve taken, to give you a flavor for what they’re like… 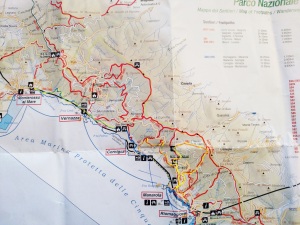 Trails highlighted which we hiked

We picked up a trail map at the Park Office in Manarola, which we used as our reference all week. I’ve highlighted the trails we hiked, so as you can see, we barely scratched the surface, but we still very much enjoyed it! The entire 5 villages of Cinque Terre are contained within a national park, so all the trails are maintained (quite well, considering the conditions) by the park service and volunteers. They’re very well marked, and it’s fairly easy to find the trailhead in each town. As the website says, they really are all mountain-type trails, not to be ventured in flip-flops – though we did see that, and little pet dogs, too. But I would have to say they shouldn’t be 🙂

Manarola to Corniglia (Trail #s 506, 586, 587 – approx. 4 mi – hiked Oct 19): The coastal trail between Manarola and Corniglia (the blue line) is currently closed due to landslides, so this is the next nearest route. It’s actually quite a nice hike, which took us about 3 hours including a lunch stop. It starts near the switchback in Manarola (about 100 ft from our apartment), and quickly climbs stone stairs through terraced vineyards. These aren’t vineyards like we’ve seen in the US and other countries, but rather are very small, individually tended grape arbors, whose grapes (as I understand it) are generally sold to a local co-operative at a very subsidized rate. The idea of the subsidy is that tending and harvesting grapes grown this way can only be done with an enormous amount of manual labor, but the government wants to keep these vineyards maintained as the miles upon miles of dry-laid stone terraces are one of the main draws for tourism to Cinque Terre. Unfortunately, I can’t find now where I was reading about that… At a higher altitude than the vineyards are the groves of olive trees, particularly around Volastra, whose name is derived from “Village of olives”. We stopped at Gli Ulivi for cold beer and focaccia, yum! From there we got on trail 586, which ran along the hillside with beautiful sea views, sometimes pretty close to the edge. There was a very cool (literally) part which went up a river valley into a wooded area which was quite different than the exposed vineyards. Then we switched to trail 587 at a T, and headed down the hill to Corniglia.

A section of trenino rail, used to bring the grapes down the hill

Looking toward our goal of Corniglia, after about 25 minutes

This trail had a number of signs like this painted on the rocks, X indicating a private path

Lots of these small stone huts among the vineyards

We saw a fair number of Spring-like plants, though it was October

More terraced hillsides, looking back toward Manarola after lunch

All Cinque Terre trails are marked with this red & white blaze

Looking down on Corniglia about half an hour away

The trail here sort of degraded, and was a bit slippery with the previous day’s rain

Riomaggiore to Manarola (Trail #531 – approx. 1 mi in about 1 hour – hiked Oct 20): The coastal trail here (the famed Via dell’Amore) between Riomaggiore and Manarola (the blue line) is also currently closed due to landslides, so this is the next nearest route. Apparently there have been proposals and funding to reconstruct the via dell’Amore over the past few years, but they’ve only gotten as far as what appears to be preventive maintenance on the first 200 yards from the Manarola end, so who knows if it’ll ever re-open. Meanwhile, you can hike, if you dare, the half mile straight up and half mile straight down. Seriously… this is not a trail for the faint of heart, either figuratively or physically. But there were a lot of people hiking it the day we were there, which meant a good bit of allowing people to go by, as the trail is pretty narrow in a lot of places. Up up up through vineyards, then down down down into Manarola. There are a few nods to safety in the form of handrails now and then, but also often not. But still, it was a great hike, worth the effort for the breathtaking views and the ability to say “I did that”…

Trailhead on the far western side of Riomaggiore

Very steep steps out of Riomaggiore

Looking down on Riomaggiore

Looking back toward Riomaggiore from near the top

Heading down toward Manarola, which you can just see below

Trying not to look down…

Scrambling down through the stone walls toward Manarola

Manarola loop (Trail #s 506, 502, 585, 506 again – approx. 5 mi in about 3 hours – hiked Oct 22): This hike took us up into the mountain above Manarola, which gave us some really different terrain and views. We started by picking up trail 506 eastward about where the pedestrian-only part of the main street ends at the top of Manarola. The trail ran along the road a while, through people’s gardens almost, but then took off up the hill on trail 502. And up the hill, and up some more. Not as steep as some of the other trails, but really quite steadily up, until we were at a higher elevation than we’d been so far. After crossing a road, the path entered a forest of pine and chestnut trees. Ripe chestnuts littered the path, and Al gathered a pocketful for roasting later. We saw a number of game trails, which we guessed to be maybe wild boars, so we kept a wary eye open. We also heard a good bit of shooting around the intersection with trail 585, so we tried hard not to come upon a hunter by surprise. We didn’t see any other hikers on this whole trail, until we got near Volastra. We turned left at the T with trail 506, and started down the hill toward Volastra, where we again stopped at Gli Ulivi for beers (and a caprese platter this time). If I owned a restaurant called Gli Ulivi in the middle of a bunch of olive groves, I think I would have a few olive-based dishes on the menu – just saying 😉  Then we took what seemed by then to be an easy descent down into Manarola, the same trail we’d come up a few days before.

Looking way down on Manarola

In the pine and chestnut forest

This was a cool stretch of trail, seemed to be worn so deep by many many years of travelers

Vernazza to Corniglia (Trail #592 – approx. 1.75 mi round trip – hiked Oct 24): We only did a portion of this trail before turning around, as it was already afternoon when we started (after settling into new digs in Vernazza), and also we got a little impatient with the crowds. Not sure if it’s just such a more popular trail, or if it was because it’s the weekend. This trail begins just up the hill from the train station, to the right. We got some decent views of Vernazza, but otherwise not terribly exciting. But it’s likely that there are some great views and interesting stretches of trail that we missed out on 🙂 This was the first trail we were on which required all hikers to have a Cinque Terre card (pass), and there was a little pass control hut at the beginning where they were checking. We knew of this, though, so we had purchased a 2-day pass (€14.50 each) at the Vernazza train station’s park office.

Looking down on Vernazza

The pass control hut above Vernazza

A few steep and pretty bits

Vernazza to Monterosso al Mare (Trail #592 – approx. 2.5 mi in about 2 hours – hiked Oct 25): Here’s where you get the best view of Vernazza, from the hillside just outside of town. This trail begins by entering one of the back stair/alley streets in the northwestern corner of the main piazza, and takes you up the hillside pretty quickly, but without the steep stairs of some of the other trails. There’s a pass control hut on either end of this trail. There are lots of pretty stretches and great views back toward the Cinque Terre towns. This trail was also quite crowded, full of people speaking Italian, English, French, German, and Chinese – so there were a lot of pauses to let others pass, as there are a lot of narrow spots. After the high point of the trail, it went up a couple of cool stream valleys before truly turning downhill. Coming down into Monterosso, the stairs became quite substantial, but then turned back into a narrow stony path, sort of odd.

The quintessential shot of Vernazza

This section of the trail was full of olive roots

Looking back toward Vernazza, Corniglia, and Manarola

Looking toward Monterosso and the point

An enterprising old gentleman was mixing up lemonades for hikers

Vineyards on the way down to Monterosso

Monterosso Old Town in the foreground, New Town further on

2 thoughts on “I Sentieri”